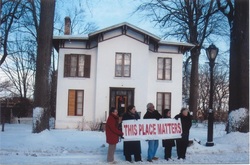 Who We Are, and What We Do!

A brief history of projects and passions...

Early Residential Restoration: Former Niagara Hotel on Cleveland and 10th. It was carefully restored and sold by Rolland Development Corporation.

Street in Niagara Falls Restored : A hands-on seminar was held at Holy Trinity Church to demonstrate how masonry repairs should be done on brick and stucco. Event sponsored by NFHPS & Holy Trinity.

Holy Trinity Church Complex : The Niagara Heritage of Hope and Service organization has continued to maintain this beautiful iconic Roman Catholic church and school buildings. These buildings are now used for tours and special events. NFHPS members toured this large complex of buildings.

Niagara’s Homecoming: Following year the NFHPS partnered with Niagara Rises to support a Niagara Falls’ Homecoming event and a variety of other projects.

Echota Home Saved and Restored!: The Rolland Development Corporation (Members Bill & Mary Ann) purchased property at 21 Hyde Park Blvd. to avoid demolition of a large home in historic Echota and successfully rented the property. NFHPS Board fought to save the building just hours before it was scheduled for demolition.  Mary Ann accepted an Award from Preservation Buffalo Niagara on behalf her and her late husband, Bill Rolland. If the Rolland’s’ had not taken on the project, the house was hours away from demolition.
Some NFHPS members participated in the restoration.

National Trust Conference: Niagara Day: In 2011, the National Trust Conference was coming to Buffalo. The NFHPS participated in a sessions designed to include a “Niagara Day.” This bus tour was very successful in many areas of the City thanks to the support of numerous groups who led the tours. The final event was held at the Tatler for all participants with a formal reception attended by 50 people from around the USA.

Home Improvement Workshop Series:  In the spring of 2011, three workshops were held in early April.
“Is Your House Historic?” by Andrea Rebeck, Architect & Consultant, “Flowers, Fences and Fix-Ups” by Marge Gillies, Cornell Cooperative Extension, Master Gardener, and “Pretty Porches Perk your Property", Tom Yots, Preservation Architect.
Average attendance 20 people for each session. NFHPS took an ad in the Home Improvement section of The Niagara Gazette to advertise the series and there was a newspaper article about the event.

Hotel Niagara ‘Sneak Peak’:  In April of 2011, Elaine Timm contacted the real estate company to ask whether there would be a possibility for the public to have a “Sneak Peak” at the Hotel Niagara, which has been vacant for a few years. The Company agreed that it would be an advantage for the public to be there when the bidding process began. The NFHPS cleaned the first few floors of the building to be sure the public would be safe. Then members conducted tours of those areas. Over 100 people attended and the building was sold and is being restored by Harry Stinson of Toronto, Canada. Mr. Stinson contacted Tom Yots to assist with the preservation of the building.

Building Material Re-use/Deconstruction: The Executive Director of Buffalo Reuse spoke to a breakfast meeting at the Sheraton regarding the organization sponsored by the Main Street Business & Professional Association. NFHPS members were there to support the work of Buffalo Reuse and to advocate for a similar facility in Niagara Falls. Thanks to the City of Niagara Falls Community Development Department, the City Council, Jim Haid and the Isiah 61 Organization. The wishes expressed by NFHPS have come true. The organization will restore the vacant fire hall on Highland near College Ave.

NFHPS Becomes a Corporation: The Corporation Papers were finally processed thanks to Bill Bradberry, former President of NFHPS and Ron Anton, who did extensive paperwork pro bono. The NFHPS was incorporated in October 2011.

NFHPS Annual Meeting at the Tatler Club:The Annual Meeting was held at the Tatler, Inc. at 6 Fourth Street by 25 people. Board member Lew Buttery presented a series of slides on the Brick Barn at DeVeaux Woods State Parks. The building was slated to be torn down. Thanks to a unified effort, including NFHPS, State Parks did install a heavy duty tarp over the roof to stabilize the building. Patricia Merino followed up with funding possibilities for further stabilization and reuse.

Plaque Project for Park Place Historic District: In compliance with the NFHPS Strategic Plan, efforts to educate the public about the economic development value of historic preservation are on-going.The NFHPS decided to support the City’s Live NF effort in the Park Place area by offering plaques that identified the date homes were built and/or famous owners. To advance this project, two public meetings were held at the First UU Church at 639 Main St. Besides hearing about the plaques, the neighbors felt there was need for a block club. Further discussion about what material the plaque is made of and placement of the script is still taking place. This project continues to gain support after a series of meetings with residents.

Membership Changes:  Past Presidents Bill Bradberry and Mary Ann Rolland both recently retired and relocated out of the area.  It was a great loss for our organization. New leadership has stepped forward and overall membership has increased.

Demolition of the Evelyn Apartments: Working under the direction of the City of Niagara Falls Historic Preservation Commission, the NFHPS Board and membership supported saving the Evelyn Apartments from demolition- a Local Landmark Building owned by Mrs. Pullo. The City Council determined that the needs of the Niagara Falls Memorial Medical Center to demolish Mrs. Pullo’s Home (not designated) and the Evelyn Apts. outweighed the Local Landmark Apartments to make room for a building to be funded by a Federal Loan. NFHPS stood with the City HP Commission to follow federal process for demolition by the Hospital required for a federal loan. This process required a public meeting.

The City Commission held a public meeting to discuss the rules of a CLG (Certified Local Government) and Landmark Status. While demolition was an option, there was need for a public process and evaluation by the NYS Office of Parks and Historic Preservation (SHPPO). As members of the NFHPS gathered for our regular board meeting, they were horrified to see that most of the Evelyn was already demolished and the house was completely gone.

Bus Tours with the NACC:  Two bus tours were arranged with the NACC and NFHPS to see the Knox Farm Estate prior to the 2013 Junior League of Buffalo Decorator’s Show House. Visitors got a sneak peak at the spacious home prior to the upgrades in early February 2013 and then in April for a look at the finished product as scores of designers decorated a portion of the home.
Following this, several of the above tour visitors joined the NACC Fall Foliage tour of Seneca Falls and Schoellkopf Site of the Maid of the Mist.

Schoellkopf Site:
Other issues of concern were the adoption of a site for the Maid of the Mist (Niagara Falls NY) at the former Schoellkopf. Representatives of the City Commission, PBN, the Niagara Falls National Heritage Area and the NFHPS have met with the owners to ensure the proper preservation of remaining artifacts.

Experienced docent trainers from PBN have volunteered to conduct the training in Niagara Falls. Prior to the training, the NFHPS will conduct educational workshops such as the afore-mentioned Isiah 61 Project, LaSalle PRIDE, and downtown National Register and other historic buildings. During each session, a reenactor portraying an historical person will advertise the docent training program. Sign-up sheets will be available as well as a brief description of the program. The Program is open to all at a reasonable cost and will be based on tours concerning the State Parks and a Victorian/1920’s tour of Buffalo Avenue and 3rd Street.

Niagara University will provide instruction at the docent program in hospitality and tourism, some costumed guides/reenactors and other technical assistance. Other groups that may be involved are the NACC Theatre Group and the Lewiston Council of the Arts.

Educational Workshops 2014
Isiah 61:
The first educational workshop of 2014 series was attended by several members. Very impressive presentation by Jim Haid on Isiah 61. Next workshops on February 28th back at the Main St. library.

There has been no docent training in Niagara Falls before and the tours that will be developed will provide additional things for visitors with reasons to extend their stay. Training to take place in late March-May with tours ready to go by Memorial Day weekend.